(based on my interview with Dolorosa Sinaga at her studio) 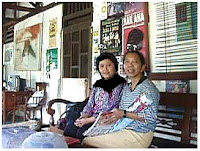 Dolorosa Sinaga is a unique person who has had a very colorful life. Dolo—that’s how her friends and family call her—is a sculptor with many dreams. She was born in Sibolga in 1952. She is married to Arjuna Hutagalung. They met in IKJ where Juna, his nickname, studied in the faculty of music. Dolo was in the faculty of fine arts. Being an art lover, Juna has always been very attentive and has always given constructive criticism to her works. Juna has never been unconcerned about his wife’s art. When still in IKJ, Dolo took sculpture because she thought that through statues she could totally express her emotions. Besides, the physical activity in the making of statues gives her satisfaction.


Her talents in art were seen when he was very young. In fact, she was more interested in music when she was a child. At the age of four, she could already play the piano. When her brothers practiced playing the piano, she would listen attentively and with another piano she did the same thing in another room. Surprisingly, she could play the songs her brothers played. Besides playing the piano, Dolo could draw good pictures. In junior high, she had friends—Thomas and Greggy—who were drawing freaks. They always drew pictures when the teachers and lessons were quite boring. The two friends influenced Dolo’s creativity.

While many artists seemed to have no concern about formal education, Dolorosa Sinaga was really eager about her studies. She is a well-educated artist. She graduated from The Jakarta Arts Institute (IKJ) in 1977. In 1982, she joined a workshop in the making of marble statues in Kornarija, Yugoslavia. Then she moved to London where she obtained a Master’s degree at the prestigious St. Martin's School of Art in 1983. After that, she continued at Piero’s Art Foundry in Berkeley where she studied the finest method of bronze casting, a technique of making bronze statues. During her study there, she also went through apprenticeships—job trainings, and joined short courses in the USA to improve her knowledge and skills.

Dolo doesn’t like to be idle. She is always active. She enjoys doing many kinds of things. Since she was a child, Dolo has always had many activities. She was involved in various types of sports such as karate, jujitsu, swimming, playing basketball. She even liked racing. Now, she is involved in organizations like The First Indonesian Women Sculptors and The Lecturer Forum of The Faculty of Fine Arts of IKJ. Dolo likes organizing sculpture exhibitions like the Art Exhibit of Women Artists, the Art Expo and Liuk Rentang Exhibition. She also enjoys teaching her students at IKJ and Sanggar Akar.

Her works are as unique as her personality. She believes that art should have a mission for humanity. Through her works, she attempts to voice the weak. Most of her sculptures represent women's expressions. The women she features in her sculpture have open mouths expressing anger, pain or joy. Sometimes she also makes sculptures of men. She plans to make the statue of Munir, the late pro-democracy activist. She has been assigned by the government of Tapanuli Tengah to make a gigantic 100m-tall statue of Noah’s Ark in Sibolga, North Sumatra, her hometown.

Over the past 20 years, she has developed her own style and her works are distinctive, not common. After trying many kinds of media like wood, rock and marble, she has finally chosen metal. Besides being more challenging, metal can yield various colors. Her favorite is bronze because it is everlasting.

In 1994 she was presented the Krida Anodya award for her outstanding achievements as a woman sculptor. In 2001, she was among the best three in the National Competition of Plaza and Monument of Soekarno. Dolorosa’s latest achievement in Indonesia was the Anugrah Citra Raya for her statue entitled Dendang Tari Rebana with the slogan of “Through Arts We Bridge the Differences”. Her works are not only known within the country but also abroad and are widely collected internationally. Her statues are displayed in many countries. Some of them are Gate of Harmony at ASEAN’s Culture Park, Malaysia; Theme for Us Today: Crisis and At the Border in Hue City, Vietnam; Solidarity at the ASEAN Contemporary Art Gallery in Washington; and Faith and Illusion in Florence, Italy. Her art may be rooted in Indonesia but her message is not limited to one country.

Dolo enjoys interacting with people and is concerned about them. When working with her students at home, which is also her studio, she likes preparing food for them. She treats them respectfully so they have a very close relationship. She never hurts their feeling. Students learn from her experience and enthusiasm. Some of them work in her studio and their works are proudly displayed next to hers.

Dolo and her husband are known as a generous couple. They never hesitate to share what they have with needy people because they are not stingy. Dolo often gives the money she gets from the sale of her statues to those who need money badly. Even though they earn a lot of money, Juna and Dolo lead a simple life. They want to share their happiness with the needy.

Dolorosa Sinaga has very often been defined as a feminist. She has many dreams for women. However, she is not the kind of feminist who gives political statements. She is a far cry from angry feminists who display harsh protests. She communicates through sculpture, not legislature. Through her works, she consistently demands harmony for women and rejects conflict against them.

She has a lot of dreams for Indonesian children whom she considers a national asset. She believes art can open their minds and allow them to experiment. When she has an exhibit, there is always space reserved for children where they can play and dirty their hands with clay. She believes that children who are exposed to art will be prolific while those who are not tend to be unproductive. "Art is the best tool to make minds productive and to make people ask questions. Especially to children, it can be a mind opener. I don't expect every child to become an artist, but I believe that every child should be in contact with a creative environment. Art allows children to experiment. It will build their self-confidence and confident people aim higher. This, in time, would make society, as a whole, become more productive."

Dolo does not just wait for people to come and experience art. She is well aware of the cultural and economical barriers of the lower classes, so she brings art to them. Together with a close group of friends who are concerned, she established Sanggar Akar and holds regular workshops for unfortunate children there. Unlike other privileged children who have all the advantages, needy children lack facilities. So this organization concentrates on improving children’s basic education and broadens their opportunities through various art forms. Through Sanggar Akar, Dolorosa and her friends pursue their dreams for the children.

ABOUT ME | TENTANG SAYA

Hi, there!
Thanks for dropping by. You make my day, really. Hey, have we met on social media? My name's Ratih Sumiratingratri. Call me Ratih Soe. 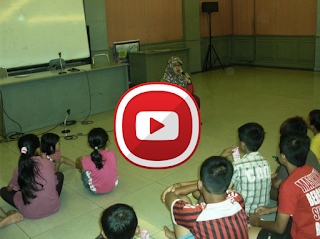